If you get my newsletter you would have seen this sketch (all images copyright Jonathan Pickup 2016).

This sketch is from my trip to Chicago for the design summit and it was drawn on my iPad. I have been using my iPad, Apple Pencil and sketching software (Procreate).

The great thing about this app is that it allows you to import a photo and sketch over it.

This does sound a lot like cheating, but I think that it is just a useful utility, much like the camera lucida that the old masters used to use. 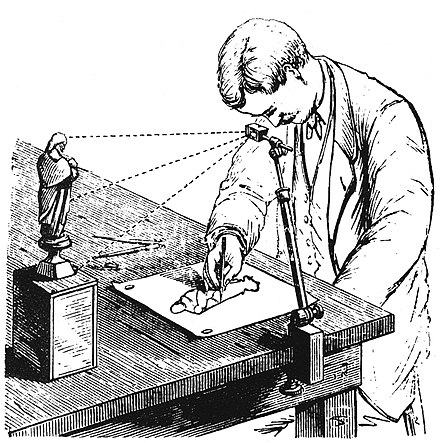 Using an app like Procreate does allow you to trace over a photo, but I prefer to sketch over the photo so that it is not a direct copy. I used to have great drawing tutor (Pat Hanley) that kept telling use to focus on the “Big Issues” when drawing.

But why talk about this and what does it have to do with Vectorworks? At the Vectorworks Design Summit I attended a presentation by Don Seidel. He showed a technique where he builds the main bulk of the building in Vectorworks, then sketches over it. This sounds very similar to my current technique on the iPad. This is also the same technique I taught my clients in London in the late 1990’s.

Until recently I was only using this iPad technique for my own sketches as a hobby, but recently I was working on a Vectorworks project. The project needed to have a sketchy presentation style and a range of wall treatments. I could have modeled the various fenestration proposals on each house, but it was a lot quicker to import a sketch and trace over it.

As well as importing a photo, the app allows you to access the camera on the iPad. So, being lazy, I just photographed the wireframe model on the monitor. Here is the image that I started with.

Using the Procreate app, I sketched the project. The idea of sketching over the wireframe is that you can get the accuracy that you need and you can add the parts that you want to give the feeling of the project.

Here is my sketch of the project. This sketch took me about 15 mins. You can see that I added the planting and fenestration changes to the first two units.

One of my tricks is to edit the background to remove parts that I don’t want in the final view.

When you add these together you get the final result.

For the time input, I think this is a great result. This is a time-lapse of the drawing being completed.

Here is another example where I used part of the photo as well as the sketch (thanks Neil Barman for that suggestion).

2 thoughts on “Sketching on an iPad”