One of my clients is a company called TigerTurf Golf & Lawn Ltd. They create synthetic grass surfaces for putting greens, tennis courts, and many other applications.

The design originally started in sand (yes, really modeled in wet sand). The design was discussed for a couple of hours with Phil Tataurangi at Remuera GC making a sand model of what they thought the client wanted. 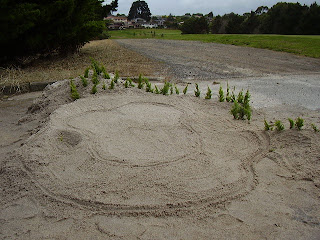 The design was sketched out roughly by hand, and given to me to draw in Vectorworks. The reason we use Vectorworks to draw the putting green is that the plan looks nice, the green and bunker can be dimensioned, and the areas are accurate. 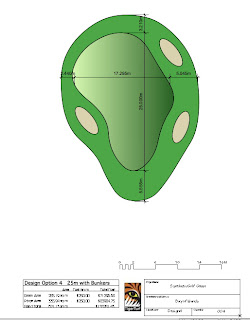 We spend some time online, discussing the fringe area, bunkers, and the putting green shape. Vectorworks makes it easy to make the shapes smooth, and the polyline shapes are easy to edit. As we edit the shapes, we can easily update the areas, which also calculates the price.
When we are finished, and the client agrees, it is off to site for construction. Vectorworks is also used to create a construction grid (@2m crs) for the contractors on site to lay out the green. This speeds up the setting out of the green, because prior to Vectorworks, the setting out used freehand drawings, with only a few dimensions.
When it is finished the putting green looks superb. It may not look very large in this photo, but the overall green is 35m long (115′) and 25m wide (82′). 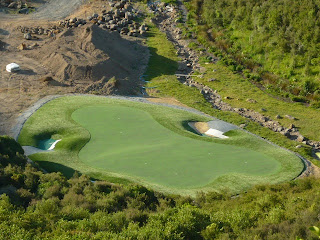