I write this review mostly from a personal level as someone who has been using VW for 15 years or so.  I am an architect so I focus mostly on how it relates to architectural work.

Vectorworks is the all-around cad program for architects, landscape architects, civil engineers, mechanical and electrical engineers, theater lighting designers and design in general.  From the standpoint of graphics VW can be a one stop shop, for an architectural office.  It’s a design tool, a production tool and a rendering tool that can also be used for most of the graphic layouts an architect might need.  The learning curve is short and the way of working with it is the way architects work. Design can be done all in 3D and those 3D drawings will be or can be the same drawings that become the 2D drawings making up the production drawing set.  Client presentations can be rendered printouts, animations, walk trough’s, or even real time views of a 3D model taken on one’s laptop to a client meeting.  And if one needs to do a graphic presentation, a competition board for example, pictures, text, 2D and 3D drawings can all be composed and printed right in the program.

I have had the program for a few weeks now and have used it to do one new project and to continue on with a project previously started in version 2010.

Nemetschek the parent company of the Vectorworks program changed the name this year to Nemetschek Vectorworks.  I take that as a good sign; a sign that they really want to identify with it and thus make it the best they can.  In announcing this year’s upgrade they are calling it their biggest ever.  I can’t be a judge of that but it does sound good, and tends to make one think it’s a must have upgrade.  So let’s think about that for a moment.

The biggest bit of news is that they have replaced the rendering engine in Renderworks with CINEMA 4D.  And they have created an easy integration with the actual CINEMA 4D program.  This is a really big improvement especially for anyone wanting to take their models to a very high level.  At the level I work at the major difference I have seen is the speed of rendering.  VW claims a 5 to 7 times increase in speed; I just know it is faster.  One can set several levels of rendering quality for custom Renderworks.  So setting it at the lower levels helps those who have slower computers get a good rendering in a short time.  One problem I have had is that importing from version 2010 windows made with the window tool don’t render.  I had to remake them.  That’s something I think needs fixing.  With yearly upgrades one ought to be able to just install the new program and continue working on older files.   Other than this one problem I haven’t had any other issues importing version 2010 files.

The other big thing is what they call 2D/3D integration.  VW has for a long time been a very flexible program allowing one to create just about any 3d form.  But now with this integration of 2D and 3D the program is even more flexible and easier to use for preliminary design.  I know there are people who design in Sketch Up and import into VW.  Now I think the Sketch Up part can be eliminated.  It’s just as easy to design in VW.  2D objects automatically become 3D as well.  One can use the new push pull tool to stretch objects to whatever size they need to be and then change them interactively.  And there are many other 3D tools that have been added or improved to make working in 3D from the start of a project easier.

I received the full design series gratis to enable me to write this review.  The package arrived with three small books including DVD’s which are for the most part tutorials for each of the main sections: Architect, Spotlight, and Landmark.  They also included a DVD with various movies and descriptions of the new features.  What is missing is a book describing all the features and how to use them.  The tutorials are great for someone learning the program or someone who has the time to go through them.  I was surprised to see that only the Spotlight book talked about the modeling features.  I’m not sure what one gets if one doesn’t buy Spotlight.  I’d like to see an old fashioned book (or at least a cd version of one) for those of us who have to or want to just get to work and read about new features as time permits without having to go through a bunch of lessons.  The built in help feature does make up for this to some extent and so does the included DVD.

I won’t try to describe every new feature.  One can find them on the VW web site.  I will just touch on a few that stood out for me.  I mentioned the push/pull tool -very handy.  Extract planar objects has tons of uses. 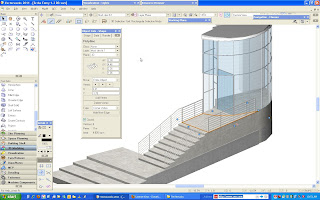 For example I made a pretty complex model then my partner asked me to calculate the surface areas of some odd shapes.  I just extracted a polygon from the surfaces then in object info found the area. One can also use this to put hatches on various 3D objects.

The new slab tool, improved automatic sections and 3D wall components takes VW to the next level of BIM.  One can create a realistic slab and it integrates with the walls.  Also the slab can be made automatically just by selecting the perimeter walls and fitted to the inside or outside of them.  Have you ever needed to show a wall with a wainscot or layer of brick on the outside that was not full height? 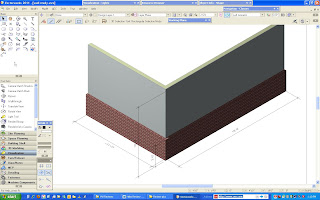 Now you can by adjusting the heights of various wall components.  That is a big time saver.  Here is the reason I have not used the wall tool in the past except in its basic from – two lines filled.  When we do construction drawings we dimension to the outside of the framed wall, not the outside of say a layer of plaster or brick, because those are the dimensions the framer needs to do his layout.  Now one can set the wall control line relative to the core component, that is for example the framed wall.   Both horizontal and vertical dimensions can also be made to show up in a final rendered view.

I like the way they made it easier to access symbols, textures and other resources.  Now there are shortcuts that take one directly to the VW libraries, workgroup or user folders.  No more hunting around each time one needs a new resource.

Another thing I found very useful is the ability to link a camera view to a viewport and to be able to create a viewport of a 3D view directly from the drop down menu.   One can change the camera view right from the viewport.  This is great for making up a sheet with various views of the model in 3D. 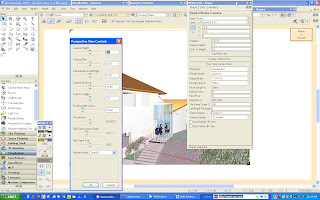 I’ve read that there are more than 70 improvements in usability and that many long-time wishes have been addressed.  I can’t write about all of them; in fact I don’t know what they all are.  It’s best if you go to the web site www.vectorworks.net/2011 where you can look at the new features for each product as well as view feature movies.

Do I think this is the must have upgrade?  Yes, I think it is because it really is a leap forward and an improvement in these areas:

I also say this even though I’m not a big believer in the yearly upgrade idea. If a program does the job, why should one have to repurchase it every year. So, buying the upgrade then depends on what one gets for one’s money.  It seems to be worth it this time.

If you are considering updating or purchasing Vectorworks I would suggest having a look at:
•the videos on the VW website, http://www.nemetschek.net/library/index.php
•Jonathan Pickup’s website http://www.archoncad.co.nz  and his videos on Youtube http://www.youtube.com/archoncad
•and you can have a look at many 3D models I’ve created (done with older versions) on my website www.hm-architects.com.