One of the new features in Vectorworks 2011 is planar graphics. This will allow you to draw graphic objects in any plane.

I have been thinking about this, and I now believe that calling the objects planar graphics does not describe the objects. I will be calling them Planar Objects form now on. Planar objects is a better description because it is not just the graphics that are on the plane, the whole object is on the plane.

You can get into a problem if you are think of 2D objects and 3D objects. 2D objects would be screen plane objects. Planar objects are not really 2D. the concept of 2D doesn’t really make sense when dealing with planar objects. Sure you used the rectangle tool to draw it, but if the object is on a 3D plane, it is no longer 2D, you can turn it and walk around it. 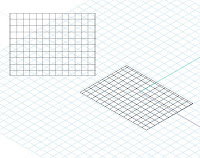 In this view you can see two rectangles. One rectangle is in the screen plane, this is a true 2D object. The other rectangle is on the layer plane. It looks 2D in plan view, and it looks like a 3D object in a 3D view, but it is still a rectangle. This is a planar object, a 2D object on a 3D plane.